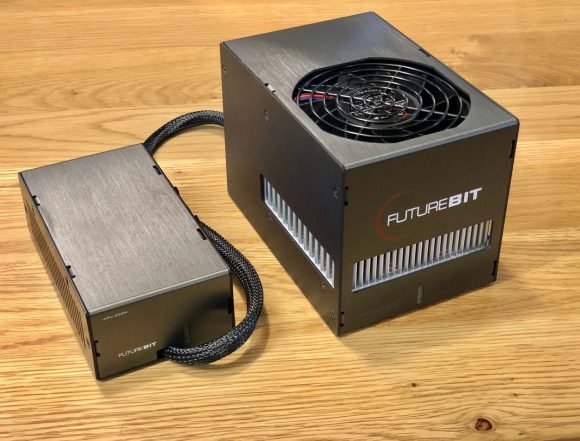 Futurebit’s Apollo LTC Pod ASIC Miner is not new, but the mining device is getting better and more functional over time. The latest Batch 3 of the Apollo comes with support for a full Litecoin (LTC) Node that can run on the miner itself with the blockchain stored on a large enough USB drive plugged in to the USB port of the device. There are three different version of the Apollo LTC Pod available – a Standard one for the miner only with no PSU sold for $349.99 USD, Full Package with a 200W custom power supply for $399.99 USD and a Full Node package that also includes a 64GB USB flash drive for the Litecoin blockchain available for $419.99 USD. All three versions support running a full Litecoin node, so you can use a custom PSU and your own USB flash drive if you already have them and get just the standard package or get everything bundled.

Full node support is available out of the box with the latest Batch 3 of the Apollo LTC Pod miners, earlier Batch 2 miners will just require software update in order to be able to get the new functionality. Owners of the first batch of Futurebit Apollo LTC Pod ASIC miners however should need a hardware upgrade in the form of a new MCU board due to insufficient RAM on Batch 1 units. The good news is that there is also an Apollo Full Node Upgrade Kit available. Here you can find more details and instructions on how to run a full node on the Futurebit Apollo LTC Pod. 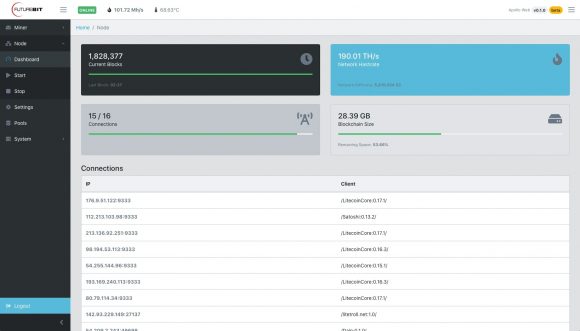 Futurebit Apollo LTC Pod ASIC Miner Features:
– Compact Stand-alone Pod Style Miner (4x6x4in) that mines any scrypt based algorithm coin (Litecoin, Digibyte, Verge, Einsteinium, Gulden, etc)
– Runs a Full Litecoin Node directly on the device
– Very wide range of operation modes with preset ECO (quiet) mode, BALANCED, and TURBO mode.
– 100-135+ MH/s of Scrypt performance per miner (+/- 5%)
– Industry leading 1W/MH in ECO mode, and 1.4W/MH for TURBO (100-200 watts +/- 10%)
– Powered by a fully integrated Quad-Core A7 ARM based controller
– First miner to be fully controlled over wifi, only cable needed is power! (this will be a Beta feature on launch..backup ethernet port is available as well).
– Clocks and Voltage is fully customizable by user with easy to use interface (no more pots!)
– Industry leading 97% efficiency 12v power-stage, with 27 ASIC chips powered in a 3×9 parallel/serial power arrangement
– Custom designed cold forged hexagonal pin heatsink with leading thermal performance for the quietest ASIC miner in operation!
– 2k-6k PWM High Static Pressure Dual Ball Bearing Fan with automatic thermal management with onboard temperature sensor
– Controlled via local connection on a web browser similar to antminers. You can simply set it up via smartphone browser. No crazy driver installs, hard to use miner software or scripts needed.
– Two Six Pin PCIE power connectors for wide-range of power draw (only one is needed in ECO mode)
– Custom Designed all Aluminum case
– Now comes with its own optional PSU and is ready to run out of the box with the PSU+SD Card option!
– New future platform features including full-node/peer to peer fully decentralize mining, full stand-alone solo mining, cloud/app based controls, and more in development.

Do note that the Apollo LTC Pod ASIC miner is not intended for use in large Scypt ASIC mining farms, the device is designed with the home user in mind that will most likely run a single not so powerful miner at home and will require a more affordable and silent in terms of operation hardware. The Apollo LTC Pod is a Scrypt miner that comes with its own web-based control and monitoring functionality, it is a standalone miner that does not require to be connected to a computer to operate. With it you can mine any Scrypt-based cryptocurrency and not just Litecoin (LTC), however as far as the new full node support is concerned it is only for Litecoin at the moment in order to provide more nodes to the network.

After Stellar 100% Rally, Bitcoin Is Finally Printing a “Sign of Exhaustion”