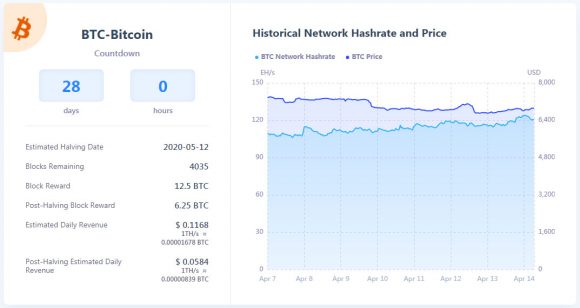 Everybody is waiting for the most important Bitcoin (BTC) halving that is happening in a bit less than a month from now, but this is not the only popular crypto coin that is going to have its halving this year (4000 blocks remaining), tough without a doubt the most anticipated one for sure. Bitcoin started at 50 BTC per block, then the first halving after 4 years reduced it to 25 coins, the second halving in another four years further reduced it to 12.5 BTC (the current block reward) and the upcoming next one will reduce he reward in half once more to 6.25 BTC per block. F2Pool has a list of upcoming halvings for this year with interesting information about the coins listed that you might want to check out if interested and below you can find a bit more information about what other popular crypto coins will have their halvings by the end of the year.

In just 12 days the closest upcoming halving or more specifically block reward reduction is for DASH where the current block reward of 1.55 DASH will be reduced to 1.43933 DASH after about 7100 more blocks expected to happen near the end of this month. In 18 days there will be a halving of PascalCoin (PASC) from 50.0 PASC down to 25 PASC per block, then there is Bitcoin Diamond (BCD) halving in about 107 days with block reward dropping from the current 125 BCD to 62.5 BCD. ZelCash (ZEL) will follow next in about 110 days with block reward going down from the current 112.5 ZEL to 56.25 ZEL, then Monacoin (MONA) will also half from 25 MONA to 12.5 MONA in about 139 days. Zcoin (XZC) also has a halving this year in 161 days with block reward going down from 14 XZC to 7 XZC, Callisto (CLO) will half in 182 days, then Zcash (ZEC) halves in 216 days and then in 229 days Horizen (ZEN).

$1 Billion of USDT Is Sitting on Binance, and That’s Big for ...